Aim: To evaluate the effect of light-curing units (LCUs) on the microhardness of class I composite restorations at different depths. Methods: Two light emitting diodes (LED) (Freelight 2, Radii) and one halogen (Optilux 501) LCUs were evaluated. Thirty class I cavities prepared in human third molars were restored with a microhybrid (Charisma) and a microfilled (Renamel) resin composite. After seven days of water storage, the teeth were decoronated and the crowns were bisected mesiodistally and tested for microhardness under a 25 g load for 20 seconds. Fifteen indentations were performed at three depths for each half-crown. Results: Charisma presented significantly higher Knoop hardness number (KHN) values than Renamel. At the superficial depth, there were no statistically significant differences (p > 0.05) when Charisma was cured with both LED curing units. However, statistically significant difference (p < 0.05) was found when Charisma was light-cured with the halogen LCU. The lowest KHN value was obtained by Renamel light-cured with both LED LCUs, regardless of the composite. Nevertheless, when the microfilled composite was light-cured with the halogen LCU, hardness was significantly higher compared to those cured with LED units at all evaluated depths. Conclusions: The effectiveness of polymerization is related not only to the light-curing source, but also to the type of composite and the curing depth. 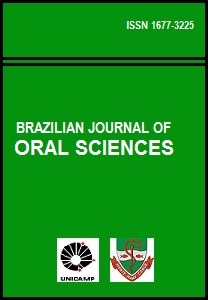 The Brazilian Journal of Oral Sciences uses the Creative Commons license (CC), thus preserving the integrity of the articles in an open access environment. 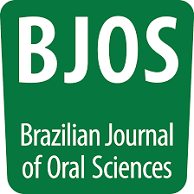